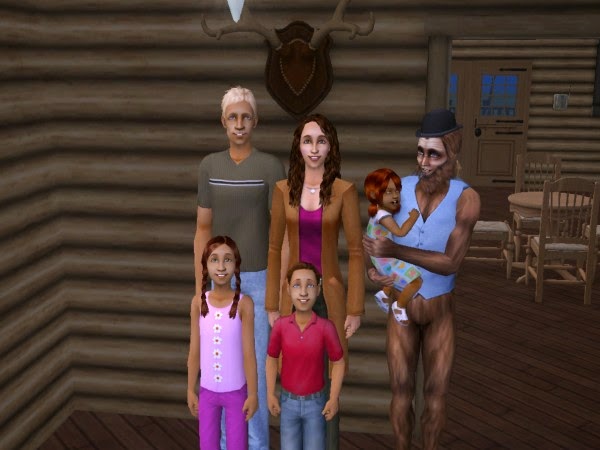 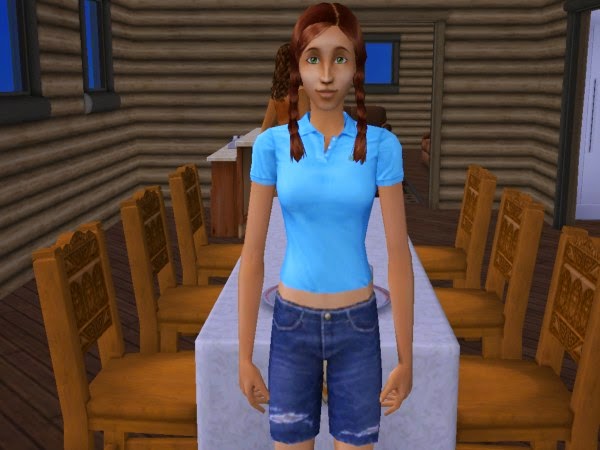 You'd think I'd be used to my life not being exactly normal at this point, given that I have a Sasquatch living in my house. But honestly, most of the time I think about what every guy my age thinks about--like the fact that my daughter somehow became a beautiful young woman overnight and I should really buy a shotgun so I can sit on the porch and clean it when boys come over. Not that Cait brings boys over for anything but study dates. She's like me and her mom, nose always buried in a book. But if any of her study buddies start getting fancy ideas, I'll be ready. 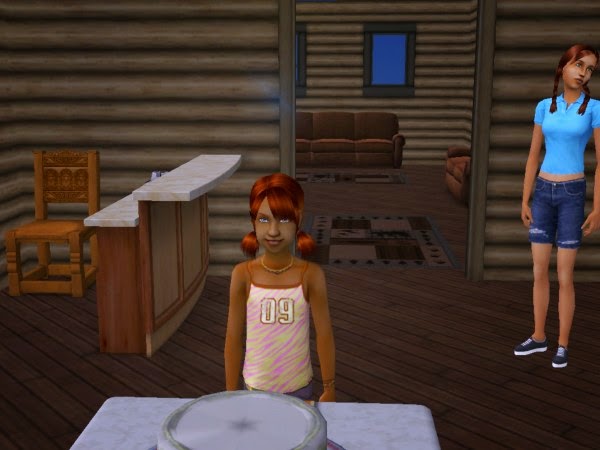 All of the kids are getting older right under my nose, come to think of it. Stacy has started school now. 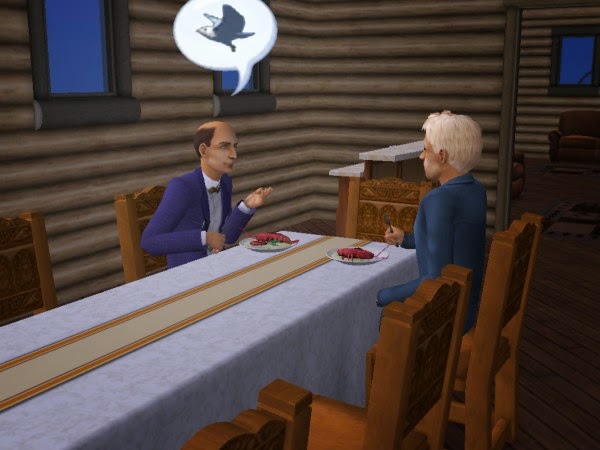 We managed to get her into private school with the other kids--I was worried we'd have trouble on account of BJ but the headmaster babbled on for a while about being in tune with nature and then informed us our application had been accepted, so I guess that's a success. At least she'll have Pat with her at the elementary school for a few years so she'll be looked after. 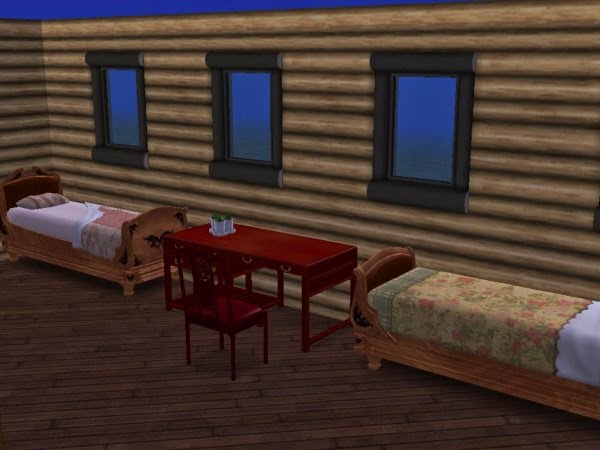 It used to be that Pat and Stacy shared a room, so poor Cait wouldn't get woken up in the night every time one of them had a wet diaper or a bad dream, but now that everybody's older and Pat's getting to the age where he wants a little more privacy, we rearranged things so Cait and Stacy are sharing.

(They have two dressers and another desk on the opposite side of the room.) 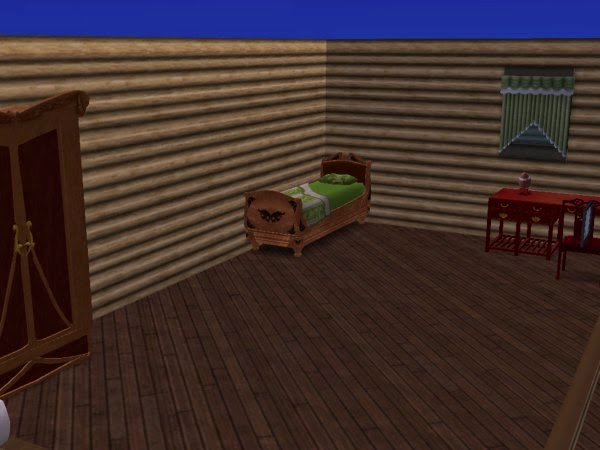 Pat's room is huge--Jeannie says it's bigger than the whole house she and her 3 siblings grew up in, though I think she might be exaggerating a bit--but it's not his fault he's the only boy. 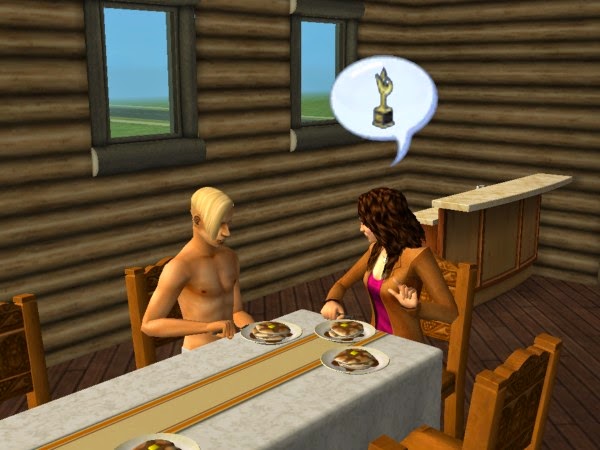 So, yeah, life is pretty boring. The most exciting thing that happens is usually eating breakfast with my lovely wife and listening to her talk about how she's investigating some celebrity stalker. 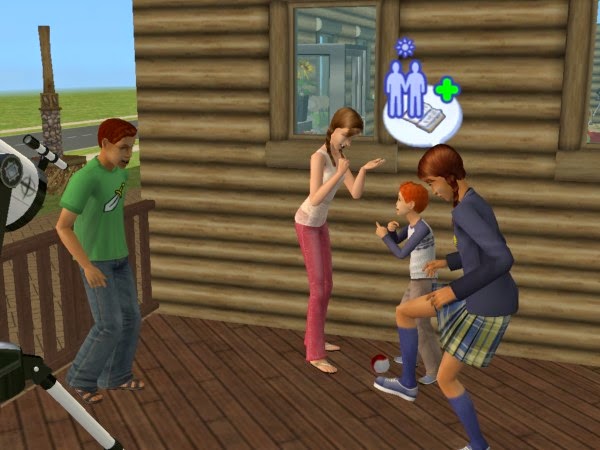 And the kids have friends over near every day, which keeps things loud and crazy. 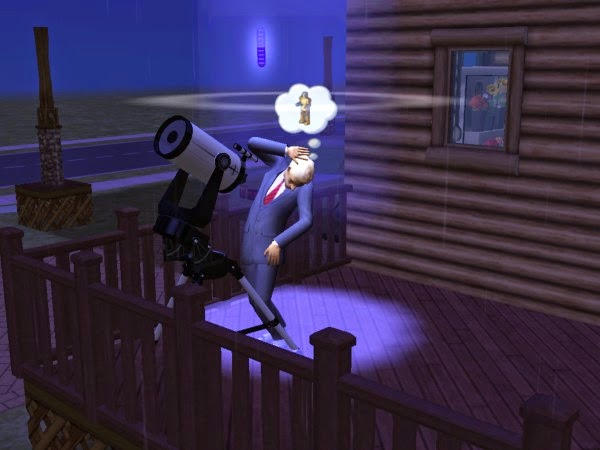 Anyway, I meant to talk about the telescope thing. Jeannie got it for me for my 50th birthday, a huge fancy thing. And sure, I guess I might have been spending a little too much time out there, late at night, when the kids were in bed and I should have been too since I go to work pretty early in the morning. 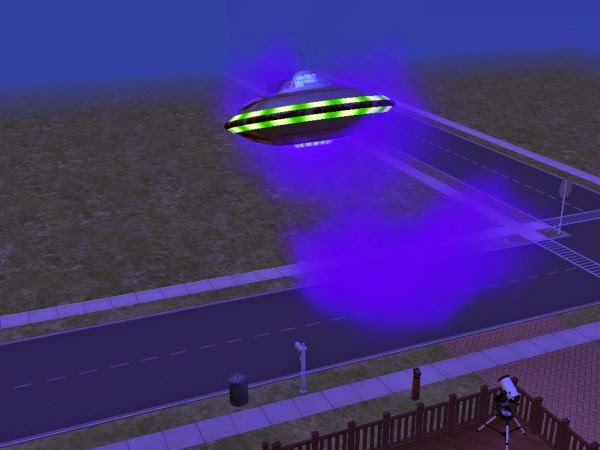 Jeannie says that I probably got so tired I started hallucinating, but all I'm going to say is it sure didn't seem like a hallucination when I got sucked into a giant flying saucer and then spat back out on my front lawn a few hours later, with no memory of what happened in between. I guess we'll see if I come down with any funky alien diseases or anything.

1. Caitlin is Knowledge aspiration, LTW City Planner, turned on by blond hair and mechanical skill but turned off by black hair.

2. So! Turns out that if your Sim's Science enthusiasm gets high enough, they can "summon aliens." Which results in...summoning aliens. I don't know if this is going to lead to little green babies in this already weird household, but I guess we'll find out next round.
Posted by The Sojourner at 10:28 AM 2 comments: 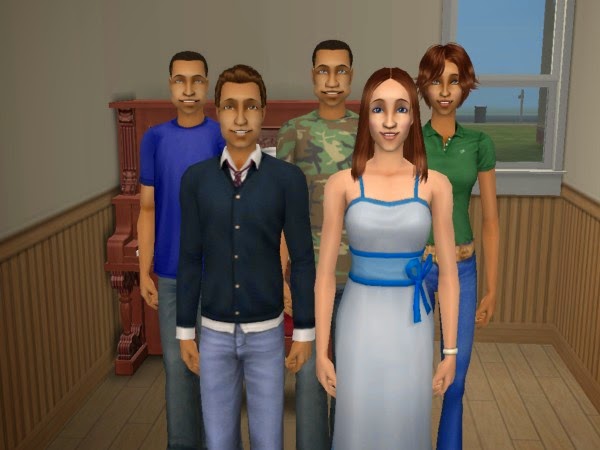 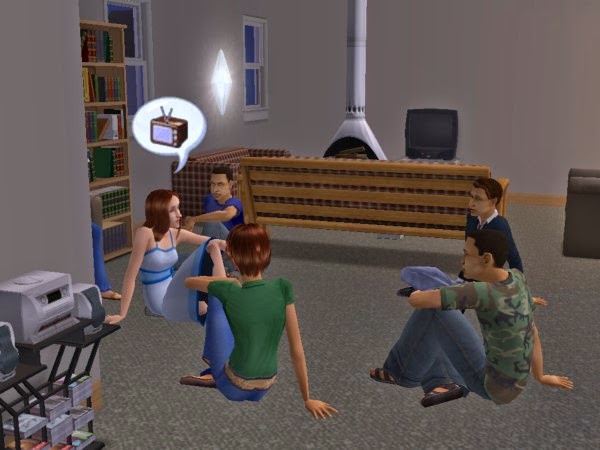 My dad never got to go to college, and the way he talked about it made it sound like it was a very small step down from dying and going to Heaven. I wasn't expecting it to be quite that great, which is good, because I would have been disappointed. Being at college is pretty much exactly like being at home, except my room is a lot smaller and the food isn't as good. And I don't have Dad constantly inviting me to study with him. 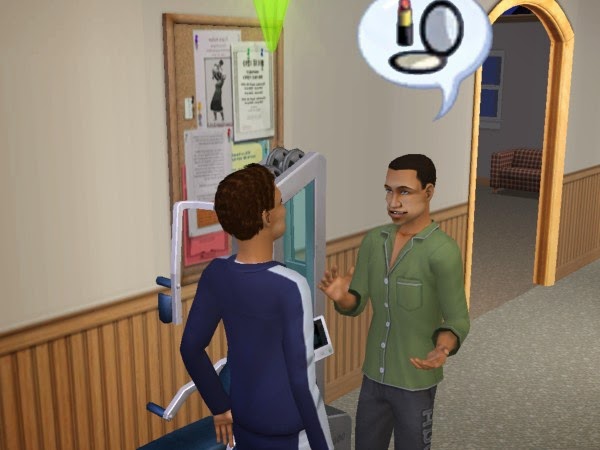 It doesn't help that I was kind of lonely the first semester. The only people I already knew were the Pons boys (since I'm kind of dating their little brother), and they spent all their time trying to pick up women. Todd too. He's got a little more style than his cousins, but at heart he really just wants to pick up women too. 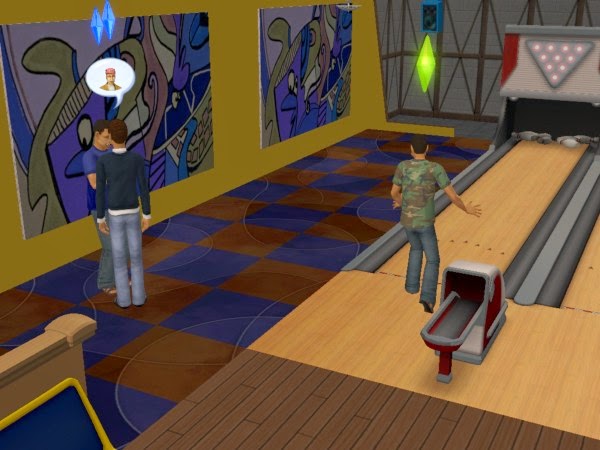 They didn't seem to have much luck, though. Apparently whenever they went out they only saw other guys, and none of them swing that way. I must admit I am glad of it; I don't really want to hear about their romantic adventures with people of either sex. I got enough of that from my mom when I was growing up. 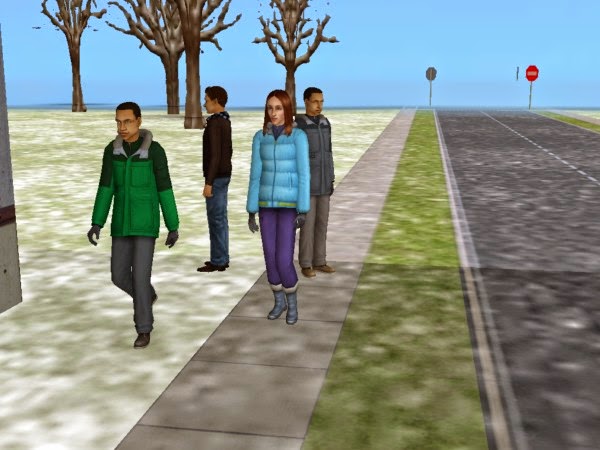 I got straight A's the first semester, and so did the other girl from our town, Lauren. The boys did okay, but they were more a mix of A's and B's. 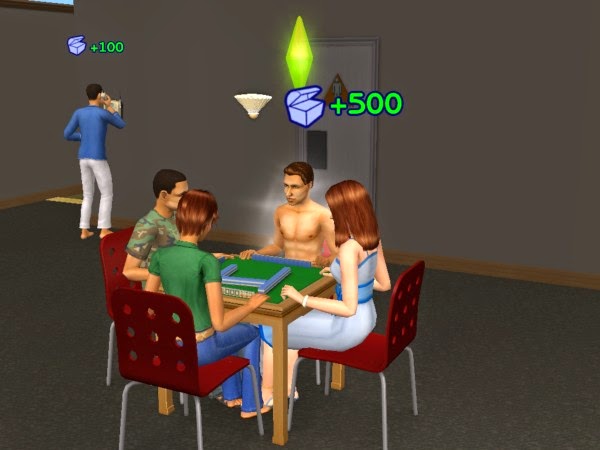 The second semester, the boys apparently gave up on women in favor of gambling. I swear their butts were glued to the chairs around that mah jong table. Within a few months Todd and Joe were both gold members of their gaming club or some such nonsense. 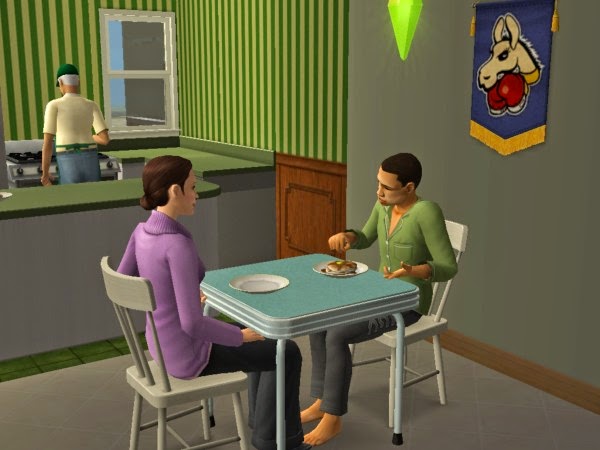 Seth didn't do quite as well. I think he found out that when you stop acting like an idiot trying to pick up women, then women start to actually like you. At least, he seemed to be having some pretty long conversations with this girl Anna--my brother Jaden knew Anna a little bit and says she's "smart," which coming from him means "off the charts brilliant." I wonder what she sees in Seth--maybe it's an opposites attract thing?

Meanwhile, I discovered that I'm not a total hopeless nerd like Dad and Jaden. There's this basketball hoop just outside the dorm and I actually really like going out there and shooting some hoops to clear my head. Lauren ended up going out there with me most of the semester. She confessed to me about two weeks from finals that she doesn't even like sports; she just got lonely without any friends and thought maybe I'd like her if she played with me. I do kind of like her now, though I told her she can feel free to suggest the activity next semester. 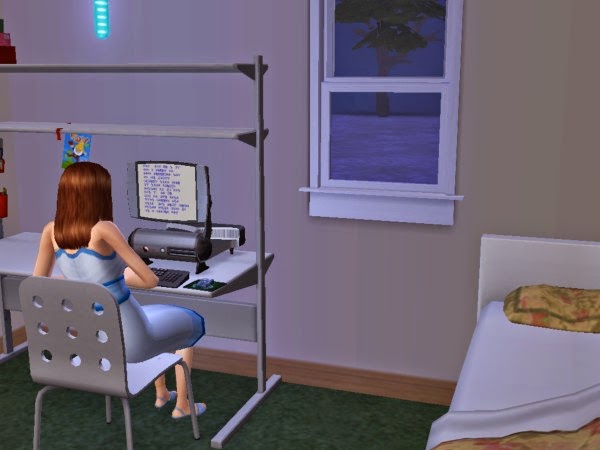 Right after her basketball revelation Lauren apparently got a bad grade on a quiz or something and it put the fear of the SimGoddess into her--or at least the fear of academic probation--and I barely saw her again until we were back home for the summer. I think she would have done fine either way, but who am I to tell her she's not supposed to study at college? 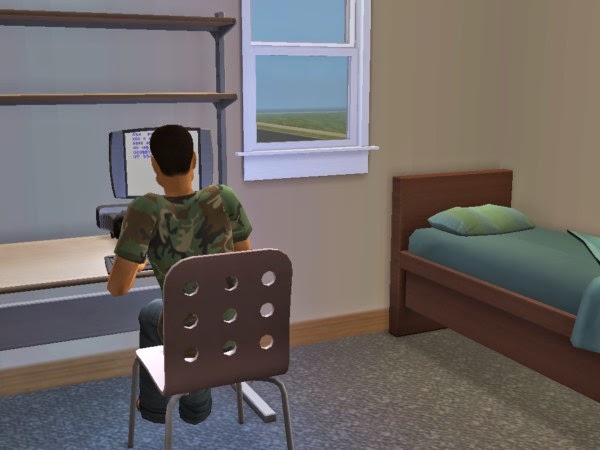 She rubbed off on Seth too (or Anna rubbed off on him) and he spent finals week locked in his room cramming for all his tests. Cramming is one thing I just don't get. Either you know the material or you don't; trying to speed-read everything the night before the test isn't going to do a thing. 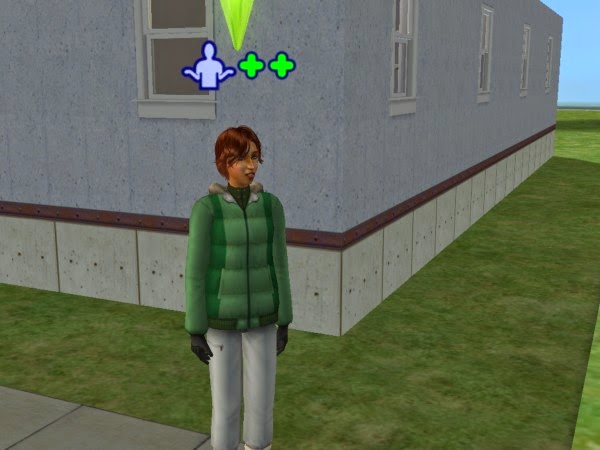 Of course, I probably shouldn't judge, considering Seth made the Dean's List while I averaged a B minus in my finals. That stung a bit. And I know Dad's not even going to say anything; he'll just sit and play chess with me all summer like he's been doing my whole life. And maybe someday I'll figure out what the chess is supposed to be a metaphor for.

- Alexis and Lauren both have 1 outgoing point, but Alexis has 1 nice point whereas Lauren has 6. So I see Alexis as much more the prickly, standoffish type of shy, whereas Lauren is the more socially anxious type. At any rate, they're well on the way to becoming BFFs now.

Lauren and Seth have career-related LTWs, so I picked their majors for them. Joe and Todd rolled wants for their majors. So far Alexis seems to be drifting a bit, not rolling any school-related wants at all. (She mostly rolls wants to play chess and computer games and things, with a few basic romantic wants thrown in--unfulfillable, since her intended is still in high school.)

I got bored of everybody getting a 4.0, so I am trying a new tactic where I only make college students study if they roll wants (e.g. "Get a skill point", "Write term paper"), or if they roll a fear of academic probation. So far nobody's flunked out, but we'll see what happens when the skill requirements get higher.
Posted by The Sojourner at 4:14 PM No comments: