Douglas and I ended up getting married just a month after I graduted from college. I managed to keep it low-stress by having a very small wedding with just my family and our closest friends. (Douglas' parents couldn't make it, but they sent their good wishes.) 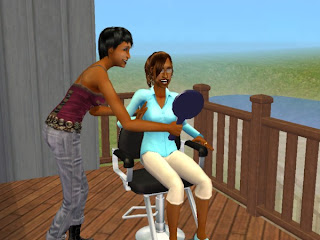 The morning of the wedding, Ingrid came over and did my hair. I loved it, of course. 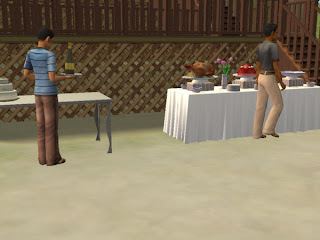 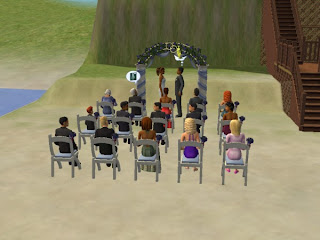 Between one thing and another, the wedding started about an hour later than we had planned, but finally everyone was in place and we were ready to start. 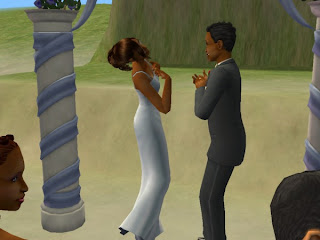 Our ceremony was pretty traditional and basic. We said our vows... 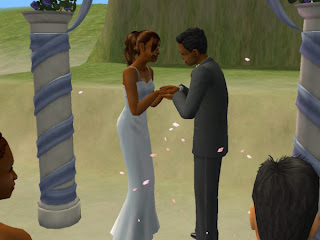 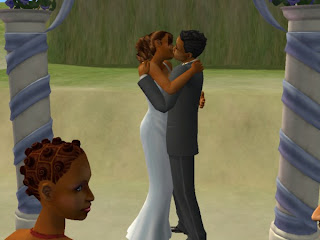 and had our first kiss. 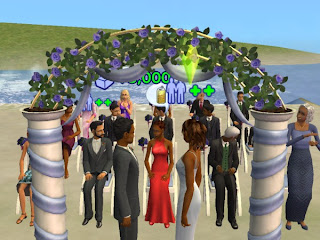 My mom was so excited that she gave us a standing ovation as soon as we were done. Nobody else joined in, but she didn't seem to mind a bit. 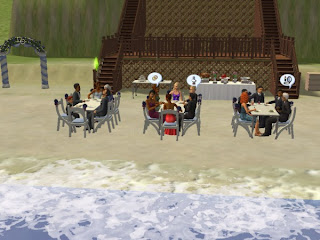 Afterwards, we sat down for a sort of late lunch. It was an awkward time of day for eating, but I for one was starving...I hadn't had a bite since breakfast that morning. 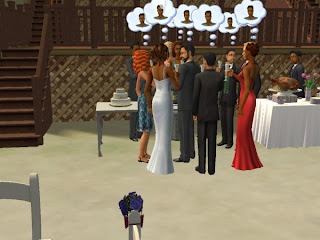 Jaden was the best man, and he gave a very sweet toast. 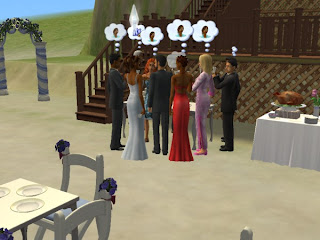 My sister Jeannie was the maid of honor, and her toast was just as touching. I might have cried a little bit. 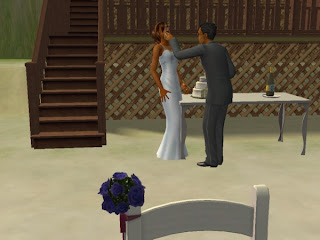 Then everybody backed away from the table a bit so Mom could get a good shot of us cutting the cake...Mom is a good photographer and it's amazing how many pictures she was able to get in the middle of spazzing out about her baby getting MARRIED. After that we had a bit of dancing, but not much since it was already dark. My siblings all walked home so Brian could go to bed on time, and I think Ingrid and Marion and Maggie went back to their place to watch chick flicks or some such thing. They claimed to be tired of all the smoochy couple stuff, but I think they were just tired of walking on sand in their heels. 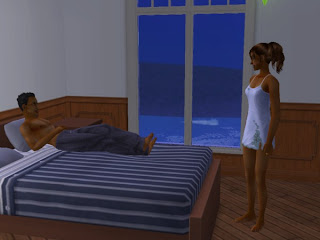 Finally everybody was gone, and Douglas and I were alone in our bedroom. I'm not going to lie, I had a bit of a nervous moment just then. I mean, thinking about being married and all that that entails is one thing; actually standing in front of your shirtless husband in a skimpy nightgown is quite another. 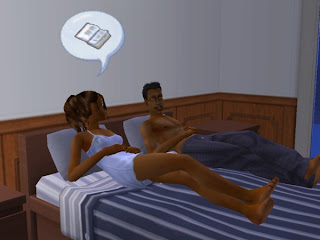 Douglas calmed me down by asking me about the book I'd been reading most recently. 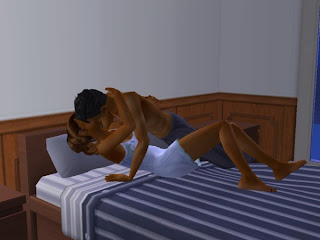 Eventually we did things other than talking, but I'll leave those to your imagination.

1. So, my first attempt at a fancy wedding. I am really sad that I didn't get posed pictures of the wedding party or Sarah with her family, but I ran out of time (both in-game and IRL) and decided to just call it a lesson learned and be more efficient next time. (You'll see the fruits of that in my next mini-update.)

2. Sarah wore the same wedding dress as her mother did. It just seemed like the kind of thing she'd do.

3. Joan was the only one who stood up to clap because everybody else was still sitting in their chairs like I told them and not actually watching the wedding at all. (I had to eliminate a lot of photos that had speech bubbles in them...Gretchen and Jaden were having an involved conversation about food during the vows.) That is another mistake I worked to remedy the next time.

4. Sarah and Douglas were both virgins on their wedding night, but Douglas had had a brief affair with Brittanie Kules (they didn't woohoo, but they did a lot of serial making out) so I figured he'd be more experienced and she'd be a bit nervous. Storyline-wise, he would have told Sarah about his dissipated youth, but in-game she has no idea. (Stupidly, it was causing major problems with Jaden and Douglas' relationship, but I managed to fix that at my next wedding too.)

5. Sarah is already pregnant. Joan will be pleased. (Actually, Sarah and Douglas also have a baby want.)

6. Custom content credit: Sarah's wedding hair is Spring in Your Step by Almighty Hat (scroll down) and Ingrid's hair is Melody of the Wind by Libitina. There was also shameless overuse of the Teleporter Cat from Simlogical (Pets version, because I don't have Apartment Life) to get everyone on the lot and make them go where I wanted them to go.
Posted by The Sojourner at 11:50 AM